Part 2 – Tom is a valuable member of the COTA Insurance Team. Pre-COVID-19 Tom and his partner toured New Zealand. Here he shares his journey with us. 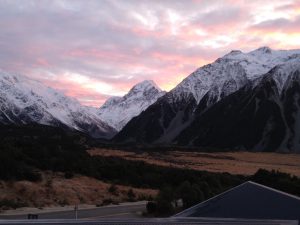 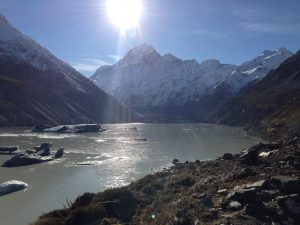 As New Zealand has now been declared COVID-free, it is possible that NZ travel will soon start becoming more accessible. This is promising, but we should also avoid getting complacent. Even when statistics support that NZ is comparatively safer than other overseas destination; travellers should continue to evaluate their personal health, individual circumstances, and any potential risk to themselves and others should the opportunity to travel to NZ arise.

I wish you all ongoing health and the freedom to be able to freely explore the world again soon. Tom.

Snow-capped mountains, sparkling glaciers, breathtaking landscapes and countless adventures. It’s easy to see why the South Island of New Zealand is so popular with Australian travellers.

The short flight over the Tasman means skipping any jet lag and spending more of your valuable holiday time exploring your destination. Australian drivers have the advantage of being able to self-drive on the same side of the road without needing to learn to many new road rules. Access to your own vehicle gives you a kind of freedom that organised tours cannot provide. If you choose to self-drive, it is important to regularly monitor relevant road and weather conditions before hitting the road. Here are some highlights from our 12-day winter circuit of New Zealand’s largest Island.

I was not keen on driving with chains in heavy ice and snow, so we decided to leave the car at the hotel and booked a guided day tour to Milford Sound, one of many fjords in this area. Unfortunately the roads leading to Milford Sound snowed in and became completely inaccessible.

We rebooked the day to visit another fjord called Doubtful Sound instead. When we arrived, we had to wait for our boat, so we passed the time by building a snowman and having snowball fights. Once we boarded the boat, we spent a few hours cruising down the fjord admiring the scenery and wildlife including a huge seal colony.

We headed for the ski-area closest to Queenstown. We jumped in the car and drove ourselves to the slopes. Heavy snow started falling again. Applied chains to our tyres and commenced a cautious ascent up the mountain. Heavy snow days are particularly popular for skiers, so we spent quite some extra time in queues to get sized up and to obtain our gear. As it was our first time on skis, we spent half the day on beginner tracks. Eventually we got the feeling for staying upright and managed to complete some decent runs by the afternoon. Walked away feeling like we have learned the basics, although more than the one day would be needed for more dedicated skiers. Between the gear hire and the ski passes, our ski budget stretched for just this one day. Was an enjoyable day and totally worth the borderline frostbite.

This day has taken us through the old gold rush areas of Central Otago. We also toured a hydroelectric dam and observed how large quantities of water is used to generate cleaner power compared with fossil fuels. Who says a holiday can’t also be educational?

We toured the local Cadbury factory, because chocolate. We also sampled ale from the local brewery, because beer.

Our curiosity moved us to visit Baldwin Street, Dunedin, recognised by Guinness World Records as the steepest street in the world. It was simple enough to locate it on our GPS. Upon arrival, we walked up and down this street. I would only do this once. The angle differences between the street itself and the straight level houses made for some interesting photos. Respect to the engineers who have built here.

For a special dinner in Dunedin, I recommend eating at Etrusco at the Savoy (4.5 stars). One of the best Italian restaurants I have experienced. We still talk about their wild boar ragu with pappardelle dish. We were provided with attentive service and expert wine pairings.

We drove through some sheep country followed by an extended drive past the stunningly opaque turquoise coloured Lake Pukaki. Few hours later, we arrived in the shadow of New Zealand’s highest peak:, Aoraki/Mount Cook, standing at an elevation of 3,724 metres. This is a sparsely populated area with structures mainly purpose built as accommodation for tourists. I could not get over the unparalleled beauty of this location.

We recommend Hermitage Hotel for a comfortable stay and for direct views of Mount Cook. For a 4-5 star special dinner option we tried the onsite Panorama Restaurant where we ordered a nice cut of medium-rare venison. Once again we tracked down a more affordable alternative, so a short drive away we discovered Chamois Bar and Grill serving all the usual cafe fare at much more reasonable prices.

Despite subzero temperatures, we were keen to hit the Mount Cook surrounding trails, so we did not waste any time. Layered up our clothing and started walking directly from the hotel. On route, we discovered large lakes completely frozen over. We spent some time bouncing rocks off the frozen lake surface which made an amusing high pitched ping sound. We also found a liquid water river with floating icebergs at the base of Mount Cook. On the walk back we made it our mission the smash the frozen surface of every frozen puddle we came across – adulting maturity is not required 24/7.

After the sun went down we joined a star gazing club aided by some high powered telescopes. This area is known to have the clearest skies, the most visible stars and the lowest light pollution. This area has been deemed the Aoraki Mackenzie International Dark Sky Reserve since strict lighting controls have been in place here since the 1980’s leading to the best possible star gazing experience in existence.

We returned to Christchurch airport and boarded our flight back to Australia.